Lost Planet 3 is an upcoming third-person shooter video game developed by Spark Unlimited and published by Capcom for Microsoft Windows, PlayStation 3 and Xbox 360.

The game is the prequel to Lost Planet: Extreme Condition and Lost Planet 2 and takes place on the same planet of E.D.N. III.

The game will take a more story-driven narrative approach to the campaign similar to the first game.

Unlike previous games in the series, which were developed internally by Capcom, the game will be developed externally by Spark Unlimited with Matt Sophos serving as game director, though series creator, Kenji Oguro, is still attached as franchise creative director.

Make sure to check out XPGRinnegan's Mod Tool Below.

And JohnAKAGoldGiver's Max Money Save here.

Great work all around thanks guys

If you wondering how to use any of these follow the tutorial below.

Simply copy your save over from your xbox to a formated USB then open your choice of mod tool.

Open the save and you will get this image. 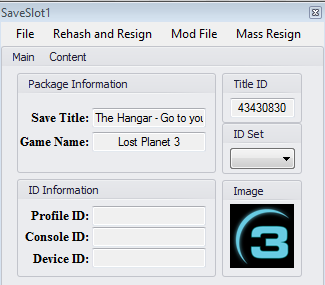 Now extract the save to your desktop or where you like.

Click load and locate your save mod as you wish and then click save reshash and resign and your done.